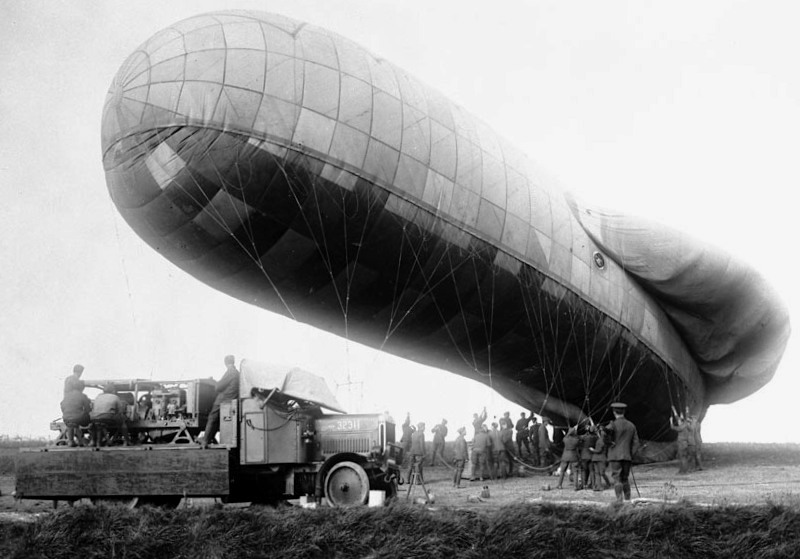 No doubt you’ve all heard of the phrase “The balloon’s going up!”, but did you know it was an expression for an impending battle?

The phrase is derived from the fact that an observation balloon’s ascent likely signalled the beginning of an artillery barrage, guided by information provided by the observer in the balloon.

The First World War was the high point for the military use of observation balloons.  Despite it’s experience in operating balloons in South Africa, the British Army were behind in developments and were still using spherical shaped balloons.

These were quickly replaced by more advanced types, known as kite balloons, which were more aerodynamically shaped to be stable and could operate in more extreme weather conditions.  Kite balloons were used for observation over their sector of the Western front, gathering intelligence and artillery spotting.

The First World War kite balloons were fabric envelopes filled with hydrogen gas.  Kite balloons, were controlled by a cable attached to the ground, were often known as ‘sausages’ and first used on the Western Front on 8 May 1915 in the Aubers Ridge area.

Each balloon was maintained and tethered by a team of 48 highly-trained men, carried two passengers, known light-heartedly as ‘balloonatics’ – a commander and an observer, who, via a telegraph wire down to the ground would send back information on troop formations and artillery locations.

Due to the flammability of the gas it unfortunately led to the destruction of hundreds of balloons on both sides with the loss of the ‘Balloonatics’ commanders, observers and also the pilots of the attacking aircraft.

The ‘Balloonatics’ who manned these observation balloons frequently had to use a parachute to escape when their balloons were attacked by enemy aircraft whose pilots earned themselves the name of ‘Balloon Busters’.

The parachutes were nicknamed ‘Acorns’ and were fitted to the outside of the basket. The idea was to grab the end of a static line as you leapt over the edge of the basket if the balloon came under attack, hoping very much it would open and you would manage to jump free of any potential entanglement.

One of these ‘Balloonatics’ was a young Canadian Officer named Elfric Ashby Twidale.  Elfric was the grandson of the late Reverend Joseph Twidale, the long standing rector of over 50 years at the Melton Mowbray Congregational Baptist Church.

Elfrics father, Ashby Pearson Twidale was born in Melton Mowbray as the 5th child of the Rev Joseph and his wife Catherine and was a timber merchant by trade.  In the late 1880s, Ashby emigrated to Canada where on the 3rd June 1891 he married a Canadian lady named Clara Wilhelmena Heinrichs whose father, Peter was a native of Germany.

For the last 6 years, since his 18th birthday, Elfric had been part of the 44th Lincoln and Welland Regiment in the Militia.

Just as the First World War was erupting around the globe, Elfrics German grandfather Peter died on the 15th July 1914.  I wonder if the events around the globe caused any unrest in the family due to the German patronage?

On the 6th August 1914, Elfric was a Sergeant with the 44th when they were placed on active service for local protection duties as part of the Welland Canal Force.  The Welland Canal is a ship canal in Ontario, Canada, connecting Lake Ontario and Lake Erie that enables ships to ascend and descend the Niagara Escarpment and bypass Niagara Falls.

Elfric enlisted into the Canadian Overseas Expeditionary Force on the 8th April 1915 aged 24 years.  He was allocated service number 651 when he joined the Canadian Machine Gun Brigade, serving with the No 2 Eaton Motor Machine Gun Battery.

The Eatons were formed in January 1915 under the Command of Major W J Morrison.  They were named after Sir John Eaton who had given $100,000 for the purchase of “quick-firing machine guns mounted on armoured trucks” This paid for fifteen guns and the government supplied twenty-five.

Prior to joining the Army, Elfrics trade according to his attestation papers was a chemical engineer and whilst he was at Toronto University, he was a member of their Track Team who were the Inter-Collegiate Champions in 1913.

The Eatons unit recruited mainly from Toronto and appealed to motor mechanics, drivers and athletes so it could be this that attracted him to join this unit.

On the 4th June 1915, Elfric along with 263 other ranks and 24 officers embarked for England on the RMS Metagama.  The ship was operated as part of the Canadian Pacific North Atlantic Service and remained in Canadian Pacific service throughout the FWW.  She however, carried Canadian troops in her third-class accommodation on East bound crossings.

It seems that not only was the Metagama a new and capable ship, she was a lucky ship as only a month before, the Lusitania was sunk by a German U-Boat U-20 off the coast of Ireland with the loss of 571 lives. Throughout the war the Metagama continued to transport troops across the North Atlantic without incident.

The Eatons arrived at Devonport in Plymouth on the 13th June 1915. From Devonport, the Brigade proceeded to the Shorncliffe Military Base known as “Caesers Camp” near to Folkstone, Kent.  Shorncliffe had been set up in April 1915 as a Canadian Training Division for the Second Canadian Contingent to overcome difficulties such as excessive rain, mud and exposure experienced by the First Contingent troops at the initial Canadian camp located on the Salisbury Plain.  Shorncliffe was also used as a staging post for troops destined for the Western Front due to its location. As the crow flies, it is only 90 miles from Ypres in Belgium.

Whilst at Shorncliffe, Elfric was promoted and became a Signalling Sergeant and at some point later he became a Sergenat Major with he unit.  Whilst in England, he applied to his Commanding Officer Captain E.L. Knight for a commission in the New Army, Imperial Forces – that is the British Army.

This request was granted and he was Struck Off Strength from the Eatons on the 19th November 1915 due to being granted a Commission with the Royal Field Artillery in the New Army.

It would have been after this that he was attached to the Royal Flying Corps taking on the role of an Observer becoming one of the ‘Balloonatics’ with No 16 Kite Balloon Section based in the area around the town Arras at map reference 51c.K.18.a supporting the VII Corps.

Aircraft of the Royal Flying Corps (RFC), along with their observation balloons were used in conjunction with rifle fire and trench mortars from infantry and artillery units to attack the German trenches, supply lines and observation posts.

Although the RFC entered the battle with inferior aircraft to the ‘Luftstreitkräfte’, this did not deter their commander, General Trenchard, from adopting an offensive posture. Dominance of the air over Arras was essential for reconnaissance and the British carried out many aerial patrols.

The RFC carried out artillery spotting and photography of trench systems using both fixed wing aircraft and balloons. The aircraft were also involved in bombing enemy positions as well as patrolling their own front lines.

Aerial observation was hazardous work.  For best results, aircraft had to fly at slow speeds and low altitude over the German defences whilst kite balloons were essentially sitting ducks.  It became even more dangerous with the arrival of the Red Baron, Manfred von Richthofen in March 1917 and the presence of ‘Jasta 11’.

It was during the Arras campaign that 2nd Lt Elfric Twidale lost his life.  From 16th April, it was apparent that the French part of the Nivelle Offensive further South on the Aisne had not achieved a breakthrough. Field Marshall Haig continued to attack at Arras, to continue to divert troops from the French on the Aisne.

On the 22nd April, the day before the Second Battle of the Scarpe which took place on the 23rd & 24th, Elfric was performing his duties as a ‘Balloonatic’. He would have been observing and recording enemy positions from his balloon basket, most probably observing actions on the front-line and behind it, spotting enemy troop movements or unusual activity of any sort, and to call down artillery fire onto any worthwhile targets.

Due to their importance, kite balloons were usually given heavy defences in the form of machine gun positions on the ground, anti-aircraft artillery, and standing fighter patrols stationed overhead. Other defences included surrounding the main balloon with barrage balloons; stringing cables in the air in the vicinity of the balloons; equipping observers with machine guns; and flying balloons booby-trapped with explosives that could be remotely detonated from the ground. These measures made balloons very dangerous targets to approach.

In the early days of the war, balloons were occasionally shot down by small-arms fire but generally it was difficult to shoot down a balloon with solid bullets, particularly at the distances and altitude involved. Ordinary bullets would pass relatively harmlessly through the hydrogen gas bag, merely holing the fabric. Hits on the wicker car could however kill the observer. It was not until special Pomeroy incendiary bullets and Buckingham flat-nosed incendiary bullets became available on the Western Front in 1917 that any consistent degree of success was achieved,

Unfortunately for Elfric, his kite balloon came under attack from a German ‘balloon buster’ aircraft and in an attempt to save his own life, he leapt over the side of the balloon basket.  Tragically, his parachute didn’t open properly and he plummeted to his death.

His body was recovered and buried in the Bucquoy Road Cemetery at Ficheux approx. 9km from Arras.  In November 1916, the village of Ficheux was behind the German front line, but by April 1917, the German withdrawal had taken the line considerably east of the village and in April and May, the VII Corps Main Dressing Station was posted there, near for the Battles of Arras.

For British soldiers the average daily loss rate at Arras was the highest of the war at 4,076. Total casualties amounted to 158,000, with the Germans losing around the same number.

The increased losses of RFC personnel providing British air support during the Battle of Arras in April 1917 resulted in it becoming known as ‘Bloody April’ for the RFC.

During April 1917, the British lost 245 aircraft, 211 aircrew killed or missing and 108 as prisoners of war. The German Air Services recorded the loss of 66 aircraft during the same period. As a comparison, in the five months of the Battle of the Somme of 1916 the RFC had suffered 576 casualties. Under Richthofen’s leadership, ‘Jasta 11’ scored 89 victories during April, over a third of the British losses.

However, the figure of 211 only relets to aircrew.  The CWGC Casualty database actually records 258 casualties serving with the RFC who died during April 1917 across all theatres of war, not just on the Western Front.