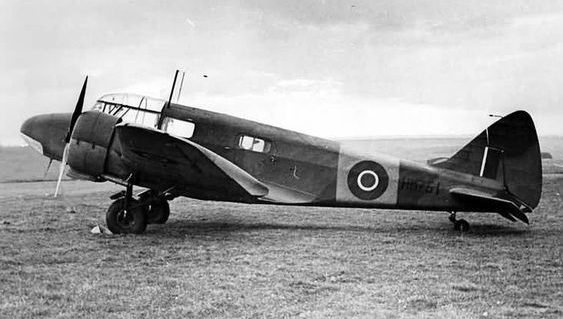 On the 13th May 1944, another fatal crash occurred near Melton this time involving an Airspeed Oxford Mk.I DF517 from No. 1655 Mosquito Training Unit (MTU), killing all four crew members, of which two had been decorated with the Distinguished Flying Cross.

No 1655 MTU (which operated Mosquito Mk. IV and Oxford Mk. I aircraft at that time) was based at RAF Warboys in Cambridgeshire and was part of No. 8 Pathfinder Force.  The purpose of 1655 MTU was to train Mosquito crews in the use of Oboe and they did this throughout 1944 and in early 1945.

Oboe training was a six week course for pilots and observers who were eventually sent on to No’s 105 and 109 Squadrons for Oboe marking duties, most were on their second tour. The Pilots at 1655 MTU had to learn how to fly a Mosquito whilst the Observers were being taught Pathfinder navigation and marking techniques.

Oboe was a British aerial blind bombing system in World War II, based on radio transponder technology. The system consisted of a pair of radio transmitters on the ground, which sent signals which were received and retransmitted by a transponder in the aircraft. By comparing the time each signal took to reach the aircraft, the distance between the aircraft and the station could be determined. The Oboe operators then sent radio signals to the aircraft to bring them onto their target and properly time the release of their bombs.

The system was first used in December 1941 in short-range attacks over France where the necessary line of sight could be maintained. To attack the valuable industrial targets in the Ruhr, only the de Havilland Mosquito flew high enough to be visible to the ground stations at that distance. Such operations began in 1942, when Pathfinder squadron Mosquitos used Oboe both to mark targets for heavy bombers, as well as for direct attacks on high-value targets.

DF517 took off from RAF Warboys on a training flight at 14.55 hours on 13th May 1944 and after coming out of cloud cover, the aircraft was out of control and disintegrated in mid-air, crashing at 16.08 hours, near the Great Dalby railway station.

It was assumed that loss of control had occurred through icing up of instruments on the aircraft, or turbulent conditions in cloud, and that the complete structural failure was a result of severe overstressing, although this could not be proved. All four members of the crew were killed in the accident, and the bodies of the RAF personnel were taken to Melton Mowbray Mortuary. The crew of DF517 was Fg Off GH Bowen, Flt Lt AEH Cattle, Flt Lt M McIver DFC and Fg Off GG Halestrap DFC.

Fg Off Geoffrey Hugh Bowen was the 1st pilot and was commissioned as Plt Off on probation within RAF(VR) GD Branch wef 27th Oct 1943 supplement to London Gazette 21 Dec 1943.   Geoffrey was the Son of Percival and Mary A. Bowen (nee Smith), of West Cross, Swansea. He was educated at Tenby Council School and at Greenhill School prior to enlisting into the Royal Air Force. He is buried at Swansea (Oystermouth) Cemetery. Geoffrey is not commemorated on the main Tenby War Memorial, but at both his former Schools. More details about his grave can be obtained via his CWGC Casualty record.

Flt Lt Aubrey Edward Henderson Cattle was the 2nd pilot aboard DF517.  He had previously served on No 214 (Federate Malaya States) Squadron.  He had worked his way up through the ranks as According to London Gazette 28/4/1942, awarded rank of Temp WO wef 5 Mar 42 RAFVR GD Branch.  He had completed 1,245 Flying hours across all types, of which 95.30 Hrs were on the Oxford. He is buried Sec. T. Grave 70. Southend-On-Sea (Leigh-On-Sea) Cemetery. More details about his grave can be obtained via his CWGC Casualty record.

Flt Lt Malcolm McIver DFC was one of the navigators aboard DF517. He was born in Toronto on the 4th Feb 1920 and was the son of Scottish parents Murdoch McIver and his wife Mary (nee Glenn). He had two brothers, Murdoch Glenn McIver, who served as a Lieutenant in the Canadian Infantry and John Samuel McIver who was a Sgt in the Royal Canadian Air Force. He also had four sisters, Catherine Margaret, Jean, Mary and Agnes Isabel.

Malcolm enlisted on the 20th May 1941 joining the No 23 Basic TC as part of the National Resources Mobilization Act (NRMA) and was allocated Regimental Number B-610642.   His occupation was listed as School teacher. On the 24th July 1941, he was struck off strength from the NRMA and transferred to the Royal Canadian Air Force and allocated service number J/11107.

He completed his initial training at Victoriaville, Quebec Trained at No.3 ITS, graduating on 7th October 1941. He then completed his Air Observers course on 19th January 1942 before moving onto his Armament Training Course at the No.1 Bombing and Gunnery School located at Jarvis, Ontario, which he completed on 28th February 1942. Next was learning how t become an Air Observer and so he moved to the No.10 Air Observer School at Pannfield Ridge for Advanced Air Observer training and graduated on 30th March 1942 with the award of his Observers Badge.

Malcolm had been awarded the Distinguished Flying Cross – No. 106 Squadron – Award effective 4 October 1943 as per London Gazette dated 15 October 1943 and AFRO 2610/43 dated 17 December 1943.  DFC Citation “This officer has completed a tour of operational duty during which he has displayed outstanding ability and the greatest keenness and enthusiasm for his work.  He has taken part in attacks on many of the major targets in the Ruhr Valley as well as the more distant objectives in Germany and Italy.  He participated in a successful attack on Friedrichshafen and returning from North Africa materially assisted his pilot in the raid on Spezia.  Flying Officer McIver has performed his navigational duties with skill, accuracy and steadiness, setting a fine example to the other navigators in the squadron.”

Flt Lt Malcolm McIver was buried at the Brookwood Military Cemetery, at 15:00Hrs on the 19th May 1944. More details about his grave can be obtained via his CWGC Casualty record.

Fg Off Geoffrey George Halestrap DFC was also a Navigator and was the son of Fred Francis Henry and Gladys Mary Elizabeth Halestrap, of Kingswood, Tadworth, Surrey.

His Distinguished Flying Cross award was Gazetted on 7th December 1943, there was no citation but the entry read: “Flying Officer Geoffrey George HALESTRAP (127308), Royal Air Force Volunteer Reserve, No 192 Squadron.”

Geoffrey is buried in Sec. W. Grave 4171 Thorpe Road Cemetery and his funeral took place at 15:00Hrs 18th May 1944 and according tot he RAF Melton Mowbray Operational Record Book, was attended by his next of kin. More details about his grave can be obtained via his CWGC Casualty record.