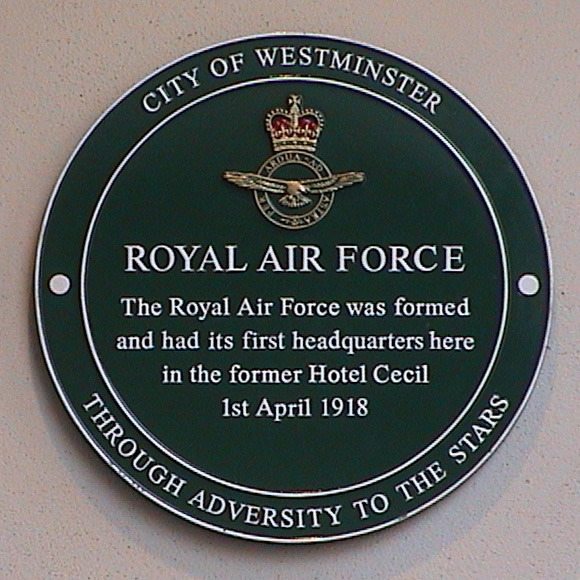 As we commemorate the birth of the Royal Air Force in April 1918, let’s take a look at the Hotel Cecil, the birthplace of the world’s first independent Air Force.

Hotel Cecil was named after the former London home of the powerful Cecil family, Cecil House (also known as Salisbury House) which once occupied the site, it opened in 1896, three years before the nearby Savoy, and stretched from the Strand to the Thames.

Designed by architects Perry & Reed in a “Wrenaissance” style, the hotel was the largest in Europe when it opened. The proprietor, Jabez Balfour, later went bankrupt and was sentenced to 14 years in prison.  It had 800 spacious rooms – a staggering number when one considers that the Savoy today has just 268. Public areas included a bright and airy courtyard, a vast Palm Court ballroom (perfect for afternoon tea during the day and dancing at night) and three restaurants capable of feeding a total of 1,150 diners.

It was, by the start of the First World War, a fashionable venue for London Society.  In 1917, the hotel was requisitioned for the war effort in 1917, and became the recruiting office for the Sportsman’s Battalion, later absorbed into the Royal Fusiliers.

The origins of the Royal Air Force lie in the increasingly-effective German air raids of 1917 and worries that the army’s Royal Flying Corps and the navy’s Royal Naval Air Service were competing for scarce resources. South African General Jan Christian Smuts was brought in by the British War Cabinet to review the nation’s air power position.

In August 1917, Smuts submitted his report to Lloyd George’s war cabinet, in which it was recommended that the Royal Flying Corps and the Royal Naval Air Service be amalgamated into one single independent force.

The report recommended, among other things, the creation of an Air Council and an air service independent of the Army and Navy.

Following the passage of the Air Force Constitution Act in November 1917 (debates on which included an unsuccessful attempt by pilot and notable scoundrel Noel Pemberton Billing to name the new force the ‘Imperial Air Force’), the new force came into being on 1 April 1918 with a strength of over 20,000 aircraft and 300,000 personnel, including the Women’s Royal Air Force.

Royal assent was received from the King on 29th November 1917, and on 1st April 1918 the Royal Air Force was officially formed at the Hotel Cecil, which served as its headquarters for the remainder of the war up to 1919.

In 2008, to mark the 90th anniversary of the formation of the Royal Air Force, the Chief of the Air Staff Air Chief Marshal Sir Glenn Torpy unveiled a green plaque proclaiming: The Royal Air Force was formed and had its first headquarters here in the former Hotel Cecil 1 April 1918.

The Hotel Cecil was largely demolished in Autumn 1930, and Shell Mex House was built on the site. The Strand facade of the hotel remains and is now occupied by shops and offices, with, at its centre, a grandiose arch leading to Shell Mex House.

Unveiled in 1931, Shell Mex House, the former London headquarters of Shell-Mex and BP, is an imposing masterpiece, boasting 49,900 square metres of floor space and crowned with the biggest clock face in London (wags dubbed it “Big Benzene”).

During World War II, the Shel Mex building became home to the Ministry of Supply, which co-ordinated the supply of equipment to the national armed forces. It was also the home of the “Petroleum Board”, which handled the distribution and rationing of petroleum products during the war. It was badly damaged by a bomb in 1940.

The building reverted to Shell-Mex and BP on 1 July 1948, with a number of floors remaining occupied by the Ministry of Aviation (latterly the Board of Trade, Civil Aviation Division) until the mid-1970s. During this time, until the department’s move to the present location in Farnborough, the building was also the headquarters for the Air Accidents Investigation Branch.

On the Thames embankment, outside of the Shell Mex you will find the Cleopatra’s Needle. This obelisk, which dates back to 1450 BC, was given to London by the ruler of Egypt and erected beside the Thames in 1877.

Either side of the obelisk, you will find the Sphinxes and if you look closely you’ll see shrapnel holes on one of the sphinxes caused by a German First World War bomb.

A committee to erect an RAF memorial was first established in February 1919, and relaunched in January 1920.  Led by Air Chief Marshal Sir Hugh Trenchard and Lord Hugh Cecil, a descendant of the Cecil family that owned the original building that stood where Hotel Cecil was located, (the eighth and youngest child of Robert Gascoyne-Cecil, 3rd Marquess of Salisbury, three times Prime Minister of the UK). Lord Cecil served as a Lieutenant in the Royal Flying Corps during the First World War.

The memorial designed by Sir Reginald Blomfield was unveiled on 16 July 1923 by the Prince of Wales (later Edward VIII).  It became a Grade II listed structure in 1958 and was upgraded to Grade II* in 2018. It is considered to be the official memorial of the RAF and related services.