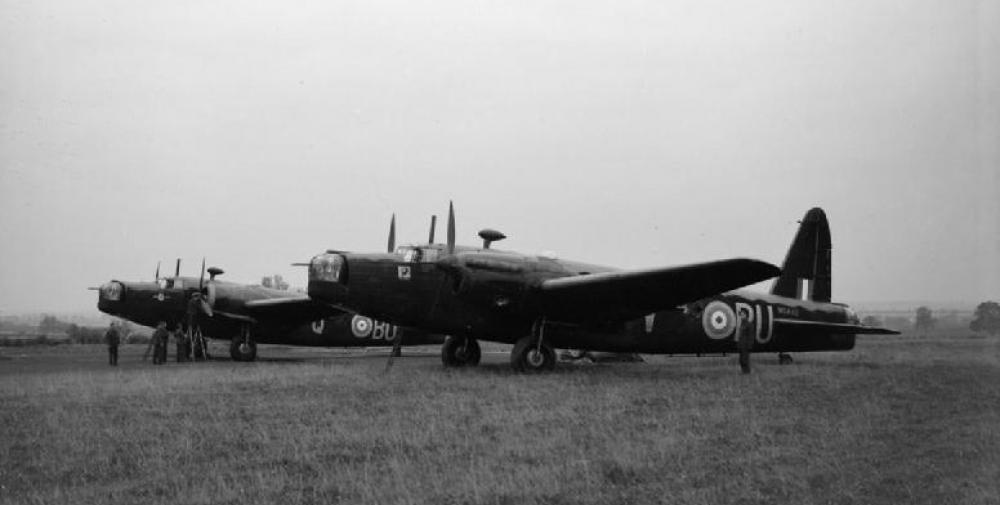 During my RAF career, I had the pleasure of being posted to RAF Cottesmore twice, once in the 90’s on the Tri-National Tornado Training Establishment, and 10 years later as part of the Joint Force Harrier.  On both occasions, I worked in offices adjoined to ‘C’ Hangar, and as usual with RAF folklore, I heard the story relating to the bravery of a former Station Commander on several occasions.

Located north of Cottesmore village, with Market Overton to the North West and Thistleton to the North East, the airfield was planned during the 1930’s expansion period and was originally known as the ‘Thistleton site’.

On the 1st May 1936, the Air Ministry announced their intentions to start building an airfield on the site and work started in July clearing the hedgerows and levelling the ground ready for the grass runways. The other main task was the construction of four large ‘C’ Type hangars, typical of pre-war construction being 150ft wide and approx 300ft in length, designed to take several bombers.

In March 1938, the Air Ministry declared that RAF Cottesmore would operate under No 2 (Bomber) group and the site opened as an airfield on the 11th March 1938.

On the 8th April 1940, No 14 Operational Training Unit (OTU) was formed from No 185 Squadron at Cottesmore and its role was to train aircrew to an acceptable standard before they joined an operational Squadron. The OTU was initially equipped with Hampdens, Herefords and Avro Ansons.

The crest of No 14 OTU shows its links to Cottesmore and its location being in some of the best hunting country. It features the head of a hunting hound, hunting horn and the hunting whip. The motto “Keep With The Pack” was selected because the Units role is to train airmen whose duties are to hunt and destroy the enemy and concentration has long been a principle in Bomber Command.

Mid-September 42 saw the OTU re-equip with the Wellington bomber and the early ones to arrive were all tired MkIc’s which had been withdrawn from front line operational service and transferred to the OTU to take up the training role.

31st March 1943 was a quiet day for the Royal Air Force Bomber Command with no raids planned.  The Force had been active on the night of the 29th/30th with two ‘Ops’ planned with the first to Berlin involving 329 aircraft comprising of 162 Lancasters, 103 Halifaxes and 64 Stirlings.  The second Op was to Bochum comprising of a main force of 149 Wellingtons supported by 8 Oboe Mosquitos.

A much smaller third raid was also carried out on the 30th by 10 Mosquitos who bombed the Philips works at Eindhoven.

On the 31st, it was just a normal, albeit a bit misty, day for No 14 OTU at RAF Cottesmore with crews undertaking routine training sorties.

One of those training that day was Australian Flight Sergeant R W Humphrey of the Royal Australian Air Force (RAAF) who was the pilot of a Wellington MkIc serial number AD628 ‘M’ of No 14 OTU.  His crew that day also comprised another 3 Australians, Pilot Officer M A Crombie, Sergeant W T Cuthbertson (Air Bomber) and Sergeant T McDaniel along with RAF Airman Sgt E A Robinson (Wireless Operator/Air Gunner) of Runwell in Essex.

The crew had been tasked with a practice bombing sortie and all had gone well until an incident on landing back at Cottesmore. At 17:30Hrs, Flt Sgt Humphrey had brought his aircraft safely back to base at Cottesmore when he landed his Wellington AD628.

Unfortunately, he landed it too far down one of the short runways and was heading straight for the control tower.  Luckily, he managed to swing the aircraft away and miss the tower, but in doing so, he crashed into another Wellington serial number X9944 that was parked in front of ‘C’ Hangar.

Both aircraft were set alight as a result of the crash and Humphrey’s aircraft AD628 careered into the corner of ‘C’ Hangar setting alight the offices that ran along the front of the hangar and also putting at risk another four Wellingtons that were inside the hangar undergoing maintenance.

Cottesmore’s Station Commander, Group Captain Strang Graham MC was quickly on the scene and disregarding the danger from exploding ammunition, petrol tanks and oxygen bottles, and although he was aware that one of the aircraft carried a 250lb. bomb, he led the rescue party in extricating three members of the crew from Humphreys blazing aircraft.

Group Captain Graham then led the firefighting party in an endeavour to save the burning hangar. He was attacking the fire, which had spread to the offices of the hangar, when the 250lb. bomb on the aircraft, less than eight feet away exploded.

The CO’s face was badly cut by splintered glass and flying debris, and bleeding profusely he was persuaded to go to the station sick quarters.  Once at the sick quarters, he ignored his own injuries, making light of them and inspired others who had been injured by the explosion.

After receiving first aid treatment he returned to the scene of the accident and directed the firefighting operations until the fire had been subdued.

The accident was handled with professionalism and bravery by many airmen and local firefighters who managed to save the hangar and the four aircraft within it.  The two Wellingtons AD628 and X9944 were destroyed in the incident, and tragically, two of Humphrey’s crew were killed.

Sgt William Tait Cuthbertson, 415310, Royal Australian Air Force was born 20th May 1921 in Kalgoorlie and was the son of Douglas and Mary Lorna Cuthbertson of Leonora Western Australia.  He enlisted into the RAAF on 14th September 1941 aged 20 is buried in Cottesmore (St Nicholas) Churchyard Extension with a CWGC headstone.

Sgt Eric Arthur Robinson, 1330303, Royal Air Force Volunteer Reserve, was the son of Harry Algernon Robinson and his wife Doris Emily. He was laid to rest on the 7th April 1943 at Runwell (St Mary) Churchyard, Essex and his grave is marked with a CWGC headstone.

Group Captain Strang Graham MC was later awarded the George Medal for his gallantry and inspiring leadership under difficult circumstances.

Graham was a veteran of World War One, initially serving a Private with the 5th Cameron Highlanders, then transferred to the Machine Gun Corps where he was promoted to the rank of Corporal.  On 27th Sept 1916, he was discharged from the MGC on Temporary Commission to 2nd Lieutenant in the Royal Highlanders (Black Watch).

It was while serving with the Black Watch that he was Mentioned in Dispatches and awarded the Military Cross “For conspicuous gallantry and devotion to duty during a night attack. When the advance was held up by a strong point, he halted his men under cover, and himself led a party round to outflank it. Although wounded in the knee, he remained to consolidate the ground won.” His award was published in the London Gazette on the 7th March 1918.

On the 1st Jan 1920, he was on the staff of No 2 (Northern) Aircraft repair Deport where he stayed until September when he joined No 2 Flying Training School (FTS), being awarded his pilots wings in Feb 1921.

His postings in the UK saw him undertake the roles of Flight Commander on No’s 7 & 27 Sqn’s as well as a tour at No 5 FTS and overseas tours in India and Iraq.

He was promoted to Group Captain on 1st June 1940 and became the Commanding Officer of RAF Cottesmore/No 14 OTU on 8th Jane 1943, the sixth Station Commander the base had had since it opened in 1938.

Behind every gravestone there is a story to be told