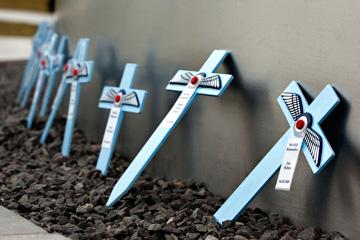 Since the pioneering days of aviation in the early 20th Century, Melton Mowbray has maintained close links with the Royal Flying Corps (RFC) and later the Royal Air Force (RAF) through the various units that have been based in and around the town, during World War 1, World War 2, the Cold War right up until present day, their are still RAF personnel based in Melton.

For a brief history of the RFC and RAF activities in Melton during World War One and for a list of airmen who joined the RFC from Melton and her surrounding villages, see Meltons’ World War One Airmen.

Through the following links, we will remember those airmen who made the ultimate sacrifice whilst serving their Monarch in the Royal Air Force or one if the Air Forces of the Commonwealth.

The list will contain those Airmen who died in service that:

a, Originated from Melton Mowbray and the surrounding villages.

b, Resided in Melton Mowbray and the surrounding villages at the time of their death.

c, Died as a result of air crashes within the Borough of Melton Mowbray and District.

d, Died as a result of air crashes following their aircraft taking off from a base within the Melton Mowbray District.

e, Buried in Commonwealth War Graves within the Borough of Melton Mowbray and District.

The lists can be searched by either aircraft type, serial number, date or crew names.

Please note this project is continually being updated and research is being carried out all the time.  Where additional information is available this can be viewed by clicking on each of the links (shown in bold text) in turn to read more information about the crash or individual concerned.

In friendship and in service one to another, we are pledged to keep alive the memory of those of all Nations who died in the Royal Air Force and in the Air Forces of the Commonwealth. In their name we give ourselves to this noble cause. Proudly and thankfully we will remember them.

If anyone has any further information regarding the above RAF personnel or air crashes, then please contact us